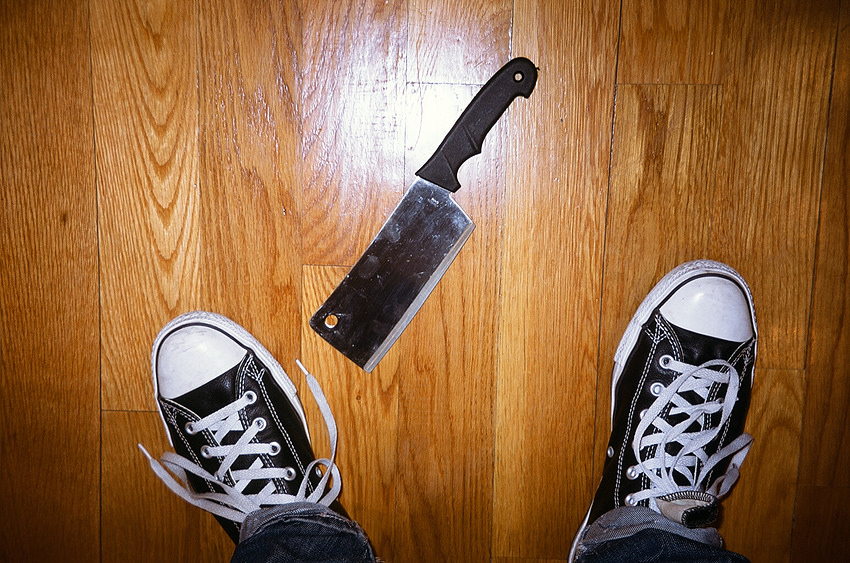 His birthday gift to her, a set of full tang stainless steel kitchen knives, lay strewn about on the counter. He lay on the floor, his penis in her left hand. A peculiar thing, she thought. It can grow and squirm like such an altogether separate entity of the body. Its ability to thrust itself blindly toward where it believes is destiny, made her feel a sickly upturn in her stomach. She remembered how, when they first began intimacy, she would say aloud a greeting to it. “Hello there.” Or “Good morning to you.” He named it King Richard, a sobriquet she played along with, though, in terms of court royalty thought it to be more of a squire or a fool. She grasped it firmly, as if a squid’s tentacle she was trying to wrangle. With her right hand she made a quick chop and buried the spine of the seven inch clever through it all. The knife stuck into the laminate flooring that shook her arm like a bat after connecting with a fast-pitched softball. She flung King Richard into the sink. With a wooden spoon, another gift from him, she pushed it down into the disposal. She flicked the disposal’s switch and briefly watched it spin around the drain and decimate into splattered flesh. As she walked to the front door to leave, the grinding noise of King Richard’s death made her smile.

He ran to her apartment. The wind and rain was nearly torrential, as his feet slapped into bulging puddles and his eyes squinted against the raindrop sharpened wind. What he left unsaid, he would say to her. He would mean it and that would be it. He arrived at her building’s door and frantically pressed her numbered button. She answered, he caught his breath and said; “We have traveled miles together, you and I. Thousands of them. But that is only inches compared to the length of the universe. We haven’t gone far at all. We are tiny. We are miniature beings on a miniature world. Nothing is ever too large to overcome, except the galaxy maybe. Please don’t quit. Please don’t give up. I loved you more than I loved anybody before you. That is true. Truth is the only measurement we know in life.” He waited for the buzz of the door lock. Instead, she replied, “The weather report says we are in for a record number of inches in rainfall and wind speed. Those measurements are real. Why don’t you overcome those on the way back to your apartment? Good bye.”